Book appointment
We are here for you

Anatol Podolsky, MD is a Mayo Clinic Trained Orthopedic Surgeon and has
been in private practice in Orange County since 1991. The specialties of his
practice are total joint replacement, both primary and revisions, and spine
surgery. He improved Joint Replacement outcomes for his patients with
latest advances and techniques practiced by leading Mayo surgeons,
including Total knee without a Tourniquet, less pain and faster functional
recovery. He invented and patented a new minimally invasive total hip
system that is going through FDA approval process.

Dr. Podolsky is a graduate of UCI Medical School. He completed his
Orthopedic training in 1991 and also received a Masters Degree in
Orthopedic Biomechanics at Mayo. During his training he won an Award
for Excellence in Orthopedic Research and earned a traveling Fellowship to
Oxford Nuffield Orthopedic Center in England. He was teaching as part-time faculty at
UCI Orthopedic Program from 1991 through 2001. He is a member of the American
Association of Hip and Knee Surgeons (AAHKS) and is active participating in all their
meetings and education.

As a spine surgeon in Orange County for over 20 years, Dr. Podolsky focuses his practice
on the evidence-based techniques and perioperative care to improve outcomes, less
invasive spine surgery areas, and similar advances allow faster recovery for his patients.
He also performs microdiscectomy and MIS TLIF (posterior only approach with
interbody fusion when necessary), and DTREX MIS Posterior C-spine fusion.
Perioperative pain and bleeding control techniques he adopted help to reduce operative
time, pain and hospital stay. A novel less invasive anterior neck discectomy and fusion,
or disc replasement technique allows outpatient discharge home. New “zero profile”
spine instrumentation and intraopeartive safety are helping to avoid previously frequent
complications. He is also a member of the North American Spine Society (NASS).
Dr. Podolsky was born in St.Petersburg, Russia. He was an athlete and was on USSR
National Team in Figure Skating. When he immigrated to the United States he was
working as a coach until he was accepted at UCI Medical School. Among his students
were Tai Babilonia and Randy Gardner, Tiffany Chin, Scott Hamilton, and Sasha Cohen.
Because of his background in skating many Figure Skaters seek his treatment for their
orthopedic injuries. He was a volunteer Doctor on USFSA Sports Medicine Committee.
Dr. Podolsky welcomes any opportunity for discussion, presentations or consultations
and treatment in his field of expertise. 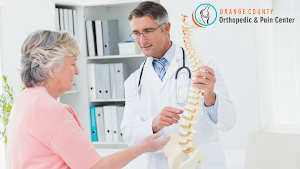 Orange County Orthopedic Center
5.0
Based on 5 reviews
See all reviewsWrite a review

Dom da Bomb
20:58 16 Sep 19
Friendly staff and great service! Dr. Shad took me in immediately after I was having lower back pain, and helped guide me to a fast recovery!